A Canadian man calling for “non-stop Nazism” was found guilty of willfully promoting hate Monday. Gabriel Sohier-Chaput authored a 2017 article for far-right publication the Daily Stormer titled “Canada: Nazis Trigger Jews By Putting Up Posters On Ch--k Church,” according to the Canadian Broadcasting Corporation. The editorial reportedly glorified reports of neo-Nazi posters pasted to a bus stop in British Columbia and mocked a Holocaust... + full article Amazon was slammed for continuing to peddle anti-Semitic products on its site despite the e-retail giant scrubbing a few Nazi-related items. The Los Angeles-based Simon Wiesenthal Center lashed out at Amazon on Thursday for “allowing the marketing and sale of Nazi and neo-Nazi... + más 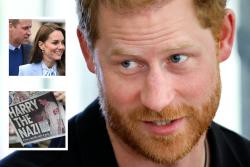 Prince Harry says Prince William and Kate Middleton urged him to hire a Nazi uniform and howled with laughter when he tried it on, in new memoir Spare.The Sun published a front page picture of Harry in the uniform in a saga he recently told Netflix was one of the biggest... + más Representative Alexandria Ocasio-Cortez took aim at Elise Stefanik on Saturday, accusing the New York Republican congresswoman of embracing neo-Nazism.Ocasio-Cortez, a New York Democrat, railed against her conservative colleague on Twitter. Her post included a screenshot of a... + más

US lawmakers take aim at gaming’s “harassment and extremism” problem

Neo-Nazis say attack leaving 40,000 Americans in dark is only the beginning While Kanye West’s deranged, antisemitic ramblings continue to draw global attention, a more insidious form of antisemitism has been making noise in South America, an antisemitism based on what one Brazilian academic calls “the imaginary Jew.” In June, at the invitation of... + más

In a on the German comedy show “Browser Ballett,” a man in a Nazi uniform, replete with jackboots and a red swastika armband, is marching down a street in 1933 when another man hisses, “Nazi.” The Nazi, aghast at the insult, confronts him.“When you’re running out of... + más

Why would Mac Jones get a second opinion on his injury, and how common is that? | The Boston Globe