With Chicago aldermen facing reelection in five months and inflation high, two more of them are forgoing raises that would have hiked their pay by nearly 10%. With Aldermen Edward Burke, 14th, and Samantha Nugent, 39th, turning down the salary increase, that brings to 17 the number of City Council members passing on the raises that, because they’re automatically tied to inflation, will be 9.6% next year. As of Sept. 2, 15 out of 50 aldermen... + full article

Members of the City Council rejected, then approved, a controversial plan to install a training facility for the Chicago Fire soccer team on Chicago Housing Authority land — an extraordinary reversal that highlighted the power mayors have to implement their agenda. The Zoning... + más

WASHINGTON — Intensifying its fight against high inflation, the Federal Reserve raised its key interest rate Wednesday by a substantial three-quarters of a point for a third straight time and signaled more large rate hikes to come — an aggressive pace that will heighten the... + más

Most aldermen will get a 9.6% raise next year. Some are calling for new limits to City Council pay.

With some Chicago aldermen set to receive raises next year of nearly 10% — and with the local election looming in February — three council members are floating proposals to rein in the inflation-tied pay hikes. North Side Ald. Andre Vasquez was not among the 17 council... + más

Mayor Lori Lightfoot has appointed Timmy Knudsen, chairman of the Zoning Board of Appeals, to be 43rd Ward alderman. If approved by the City Council, which is expected to vote on the appointment this week, Knudsen would replace Ald. Michele Smith. The ward, which includes most... + más

Most aldermen will get a 9.6% raise next year. Some are calling for new limits to City Council pay. | Chicago Tribune

A last week dispelled hopes of relief for strained households and rekindled questions about U.S. policy for fighting sky-high prices.The Federal Reserve has instituted a series of in recent months as it tries to slash price increases by slowing the economy and choking off... + más

How much 'pain'? Fed to signal more rate hikes ahead | Associated Press 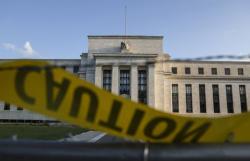 It’s been more than nine months since Federal Reserve Chairman Jerome Powell suggested it was time with respect to inflation. Yet, until last week, financial investors clung to their faith that inflation could be tamed without the tough medicine of further economy-cooling... + más

More than 7 years since Kevin Bajoie died after Baton Rouge police used stun guns to subdue the Zachary man, the wrongful death lawsuit filed by his parents will continue to drag on in court after Metro Council rejected a settlement with the family on Wednesday.Bajoie’s... + más

In fight over body camera footage of strip-searched teen, Baton Rouge settles for $86,000 | The Advocate