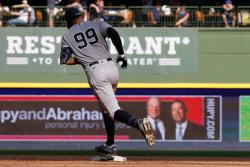 Your Boston Red Sox always seem to be in the middle of the American League single-season home run record.Red Sox outfielder/pitcher Babe Ruth set the first “unreachable” mark when he blasted 29 homers in a 154-game season in 1919. Before you could say “Mookie Betts,” the Sox traded the home run champ to the Yankees for cash.Ruth hit 54, then 59 homers in his first two seasons with the Yankees. Then he hit 60 in 1927. It was a record that... + full article

Whether it's today, tomorrow or any other day between now and the end of the 2022 season, chances are that Aaron Judge is going to break the American League single-season home run record. When it happens, it'll rightfully be seen as a big deal.In the meantime,... + más 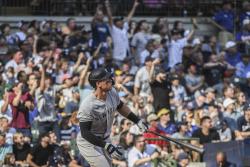 MILWAUKEE (AP) — Aaron Judge hit his 58th and 59th home runs of the season to move within two of Roger Maris’ American League record with 16 games remaining and lead the New York Yankees over the Milwaukee Brewers 12-8 on Sunday.Judge added a two-run double in the ninth as... + más

Angels Manager Nevin: 'I Love Aaron Judge Like a Son, but' Shohei Ohtani Is MLB MVP

For Los Angeles Angels interim manager Phil Nevin, there is no debate: Shohei Ohtani is the American League MVP.I've said it before: He's the most valuable player of our game right now, Nevin Saturday. Until somebody can come in and do the things he does on both sides,... + más 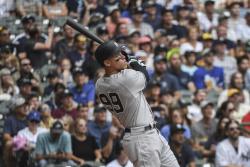 ANAHEIM, Calif. --  pitched seven scoreless innings, drove in one run and scored another as the beat   2-1 Saturday night, dropping the Mariners in the wild-card standings.The Angels' second straight victory against the Mariners came on the back of Ohtani, their two-way... + más